Its been a long road for me. Did you know Wattahack was born way back in 2004? Yes! I'm older than you think. Here was my 1st post:

Welcome to WattaHack?
Isn't that what you would think of when things go weary?
Gone wrong? Beyond your expectations....
Well, sometimes its those little things that gets to you.
Its got to come out somewhere right?
Thanks to Blogger here am I, WattaHack?
After which I was posting personal issues and many non-political things that not matter to anyone other than the romantical goooey lovebirds.... then came the famous lawsuit on bloggers Jeff & Rocky.

I actually deleted all my old postings to make room to support our fellow Bloggers currently under attack by a bunch of GOONS (Grumpy Old Orang Nak Sue)
So it all changed and my posting where more social-civil-political in nature although I still am not for any political party as I believe to stay in the middle path or some may say civil rights path.
What a long way from wattahack.blogspot.com to wattahack.wordpress.com and such an amazing road. Most important is I grew as much as this Nation grew to realise we all matter most in our own welfare. No one will stand for us if we don't stand for ourselves.
Best of all is the chance to meet all the other bloggers that made their stand and took charge and stood by what is great about this country - A Single Race called Saya Anak Malaysia. Long Live Barisan Rakyat!

with love from Wattahack!
Posted by Wattahack? at 8:06 PM No comments:


THIS REALLY SUCKED~! I was about to post my photos for BUM2008 since I came home early today but to be greeted by Raja Petra in hand cuffs really spoild my day! (I think many ppl’s as well) COMMON LAR! Cuffs for an alleged sedition case?


Sedition is a term of law which refers to covert conduct, such as speech and organization, that is deemed by the legal authority as tending toward insurrection against the established order. Sedition often includes subversion of a constitution and incitement of discontent (or resistance) to lawful authority. Sedition may include any commotion, though not aimed at direct and open violence against the laws. Seditious words in writing are seditious libel.
Because sedition is typically considered a subversive act, the overt acts that may be prosecutable under sedition laws vary from one legal code to another. Where those legal codes have a traceable history, there is also a record of the change of definition for what constituted sedition at certain points in history. This overview has served to develop a sociological definition of sedition as well, within study of persecution.


The difference between sedition and treason consists primarily in the subjective ultimate object of the violation to the public peace. Sedition does not consist of levying war against a government nor of adhering to its enemies, giving enemies aid, and giving enemies comfort. Nor does it consist, in most representative democracies, of peaceful protest against a government, nor of attempting to change the government by democratic means (such as direct democracy or constitutional convention).


Put simply, sedition is the stirring up of rebellion against the government in power. Treason is the violation of allegiance to one’s sovereign or state and has to do with giving aid to enemies or levying war. Sedition is more about encouraging the people to rebel, when treason is actually betraying the country.


Now to many of us, we know who is the worried person (no names cause I might get to bunk with RPK). We also know who needs to hide some shit. We also know who missuse our Men-in-Blue for their own benefits. Now no other BN supporter had ever been hand cuffed over a seditious remark or posting and we all know there are such seditious attempts. Neither did Men-in-Blue come knocking on their doors. Even AP cloners and Money Laundering Fake Palace Builder in BakKutTeh town were allowed to walk free and no Men-in-Blue officers dares to hand cuff them even when many police reports were made.


Sick that this country is SO DAM SICK. Its really SICK to the point that someone not important (actually knows too much) can be blown up to bits by some person/s that has access to C4 which is to be from our special Men-in-Blue. It is also SICK that the Drama Minggu Ini court case is heading to dead ends like all Pak Lah’s projects.


Now I really wish defacto PM in waiting Anwar just make some party hoppers hop over and pull out the PM post from Pak Lah feet while he’s still busy with Umno’s problems. That way Anwar can free all ISA detainees and throw RPK’s case out by throwing the head of Men-in-Blue out. Later he can dig out all the dirt on all BN ministers and throw them is jail for raping this nation for so many years. As Anwar was formerly from the wolf’s pack, I’m sure he knows where to start digging.


To Raja Petra, you are a REAL NATIONAL HERO and ‘Let’s send the Altantuya murderers to hell‘

Couldn't sleep so ended up here posting this. Getting this tee and gonna show support wearing it! 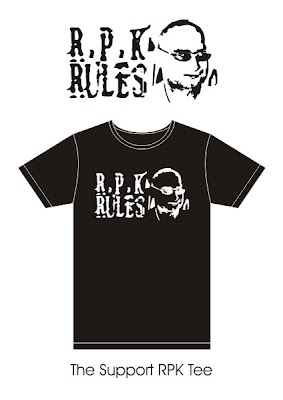 Wattahack! wanted to post some thoughts for (malaysiakini?) on Earth Day this morning but I ended up damaging the Earth by going to eat an environmental hazardous melting cake for Daphne at Kak Maria's Mee Rebus Tuesdays. So much for contributing to help the Earth. Zorro, Elviza & others didn't help too as they were busy making chimneys of their gabs.

Google put up a very GREEN GOOGLE today and its so cute I had to post it here as well. Click on it, it goes to Earth Day results which is mostly about Earth Day. Now digg this toon below from http://www.coxandforkum.com/ it tells the truth about us humans. Opps! that means Blogging is Green! Internet is Green! cause we all do away with paper and newspapers? Now we only need to relocate our PC or notebook under a tree and sit on grass to make Earth Day work.... oh! maybe next year....

Wattahack is back because MarinaM smsed news of her Olympic Torch run at Sg.Wang. (read her post here) I was in KL and made a quick detour to Sg.Wang before they lock down the roads for the run. Got there faster than a speeding China made torch and hung around with lots of Samsung flag passing sponsors. Funny as it seems to me suddenly Samsung is from China and not Korea! At least Lenovo (formerly IBM) was around with some whacky and loud cheerleaders.

The 1st Malaysian Olympic Torch Blogger?
It got cloudy and I thought it better not rain yet else MarinaM will be soaked! Also the poor camera crew were shooting from of all crappy thing a green DBKL truck! OMG!!! Bad Image for Malaysia lar…. The other problem is I didn’t have time to make it back home to get my Canon camera so you all have to see some crappy shots from my point & shoot pocket Panasonic (Panasonic care to sponsor me a better one?). Lucky got at least 1 proper shot of MarinaM… phew!
The torch looks nice and I read the design concept and I think its a very nice design very Oriental & Asian. How nice to have one? Guess you’ll have to ask MarinaM…. here
The rest of the crappy shots are here …. MalaysiaOlympicTorchRun

WHY IS MY BLOG YELLOW NOW?

By the way incase you don't know my new blog is at
http://wattahack.wordpress.com
please update your links!
Posted by Wattahack? at 5:07 AM 1 comment:

WHY IS MY BLOG RED NOW?

I wonder if Malaysiakini caught this statement?
How a guard dog would sound like when its master is away on holiday? 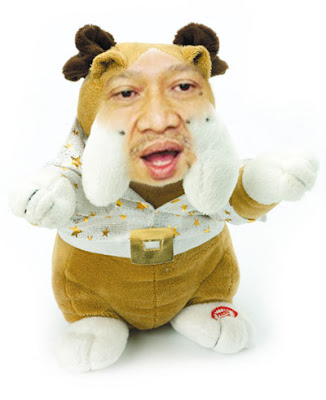 "I will ignore them as if they are non-governmental organizations (NGOS)," he continued.
Posted by Wattahack? at 10:41 PM 4 comments: