Sometimes security has a hidden back door... 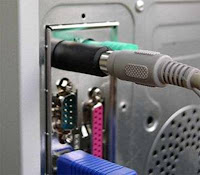 from an email:
" A new device has been introduced to the marketplace that is a huge danger to anyone who uses a PC that is not theirs. It is known as a key tracker and it sits between the keyboard and the PC. As can be seen in the pictures it is very discreet but is probably one of the most dangerous items of equipment to personal information that is readily available. These devices record every key that is pressed on the keyboard.

Due to it's position (it sits between the keyboard and the PC) the information is logged by the tracker before the PC knows about it and as such is very difficult for the PC to detect. They are available in both USB and PS2 formats so pretty much any PC can be logged. The user puts the tracker in line, leaves it there for a set amount of time and then retrieves it. They can then download the data onto their own PC. If you intend to use a PC that is not yours (ie hotel business centre, internet café, airport etc) I would advise looking at the back of the PC to see if one of these trackers has been placed in line (scrambling under a desk is the better alternative to losing your email details).

If you cannot get to see the back of the PC, I would suggest you don't use it for anything personal. If a tracker is there and you do not notice it, whoever placed it there (could be any user of that PC before you) will be able to recall all of your keystrokes – logins, passwords etc. These trackers cost less than £30 and they are definitely out there already. " example this site: http://www.keyghost.com/techextreme.htm
I've received this in my email and decided to check it out. Its actually a gadget to log whatever you key when using a PC that was intoduced long ago but now its better. Now that is a bit of an issue like selling handguns to the public at any 7-eleven. The companies that sells this claim its to help monitor your staffs or used to log every thing you type just incase you suffer a system crash.

"I tried it in several places such as the URL bar in Internet explorer and in Half-Life's console and it worked in both." says a reviewer.

Again its a nice gadget to as its claimed that you can use that to get back your info when there's a crash. That's only 1/2 truth... if only you are doing text based things with your PC. Using a mouse or digital pen won't do. So if there's a crash its gone. THAT'S WHY WE DUDES PRACTICE SAVING OR USE AUTOSAVE! ... cause no Photoshop or Illustrator files will ever be logged via a PS2 or USB port!

Now where would this nifty KEYLOGGING Gadget be best applied?
Its good just like a handgun sold in USA which is not illegal. But what if just like a handgun, any uni dude can get one and wipe the whole school out? in this case he/she can plug one at a teacher's PC or some friend's home PC without them knowing.

No those places are puny to what extend this little baby can do! Its has more uses for abuse (like a handgun) than for security/protection. In large corporations they don't use this as they use screen capturing monitoring systems and tracking via servers. That's OK as the staffs are told so and you can see it in Task Manager but this gadget is invisible to the OS and only if you are the type to check behind your PC every day then its safe.

Soft sell - Moms & Dads could use this on their kids pc to check what they are doing?

Hard sell - Crooks & Spys could use this on their victims to find their weaknesses?

Just like a handgun sold for protection, its never the responsibility for the gun maker if their customer use their product to wipe out the neighbourhood. But do we need handguns in the hands of the public the 1st place?

"A handy backup device and useful for Big Brother surveillance. The very epitome of plug and play. Idiot proof installation and operation." - a perfect gadget for any crook than any mom or dad.
Posted by WattaHack at 10:41 PM